The unique browns of Rio Frey

Years ago, as a kid tagging along with my grandfather to the little-known spring creeks of northeast Colorado, I remember seeing brown trout so marvelously patterned that I attempted to recreate them with paper and crayon at school the following week. My second-grade teacher was unimpressed.

“There aren’t any trout out here on the plains,” he said. “You must have been catching bluegills.”

He was dead wrong. The headwaters of the Republican River were loaded with the most unique brown trout I’d ever laid eyes on — they were the fish of grandfather’s youth. Sadly, those fish, and, for the most part, the springs that feed the river, are gone today — we’ve sucked the aquifer dry though thousands of well straws drilled into the water table.

Some 40 years laters, I found those unique browns again, only this time a hemisphere away, and only after a Herculean effort on the part of our hosts at Patagonia River Guides. To hook those big-spotted browns in the cold, clear water of Argentina’s Rio Frey, we first had to load two deflated rafts and their frames atop a jet boat and cruise across not one, but two big Patagonian lakes to reach the river’s source. There, the guides inflated the boats, strapped on aluminum fishing frames, and rowed us out into the second lake’s outlet, to begin our float down the Frey.

The fishing was deliberate — it’s not a long float. It pays to be economical and cast often to the river’s beech-lined banks. We stripped streamers over sunken, woody cover, connecting with the river’s clean and perfect brown trout so often they burned their memory permanently into my brain. The browns of Rio Frey are, not to put too fine a point on it, perfect. They don’t bear the mottled bronze mishmash that a lot of mongrel brown trout — fish with mixed European lineage — sport along their bodies. Instead, their patterns are a lot like the fishing on the Frey. Deliberate. Economical. Clean.

We made our casts count, and the fish, to our delight, did, as well. 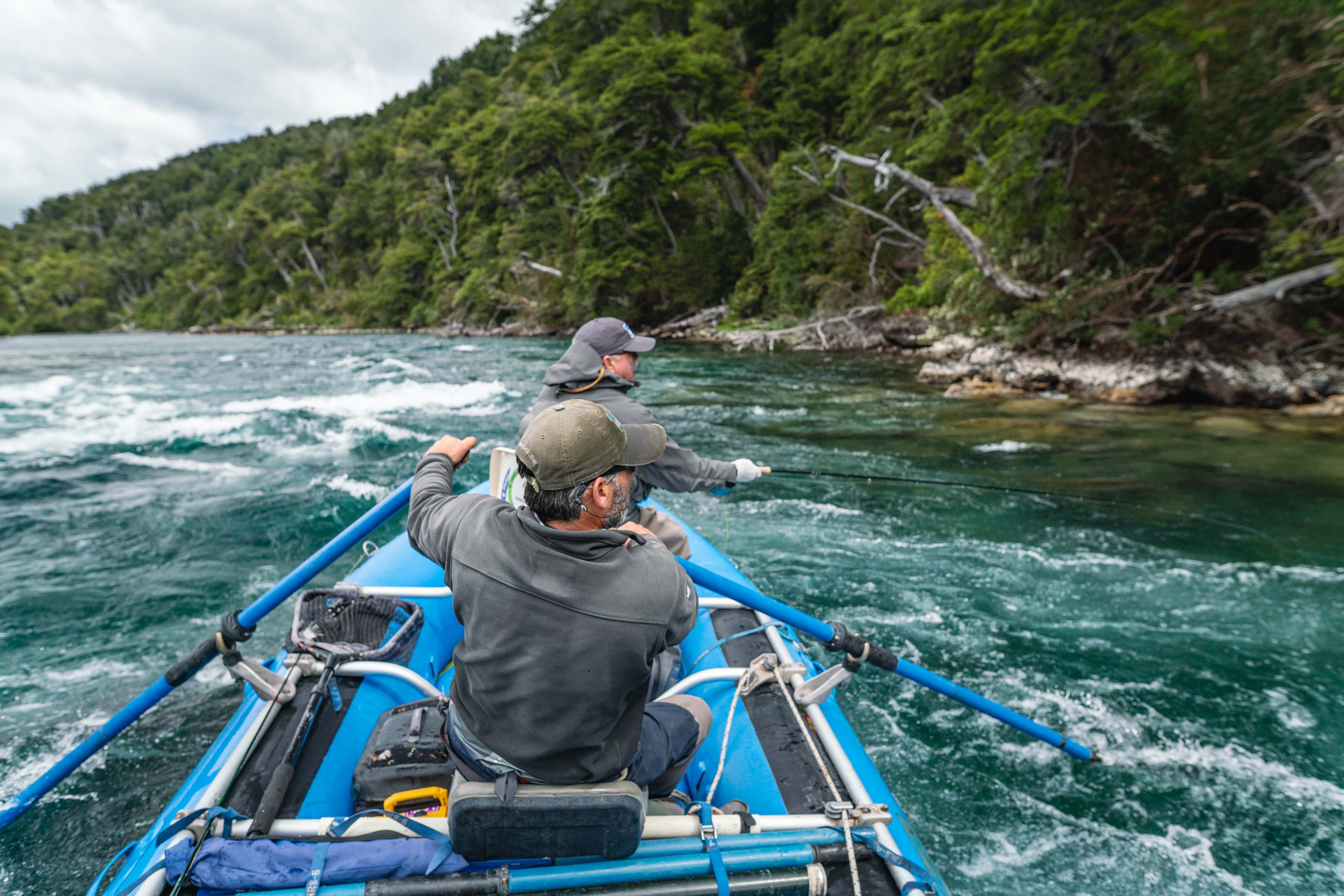 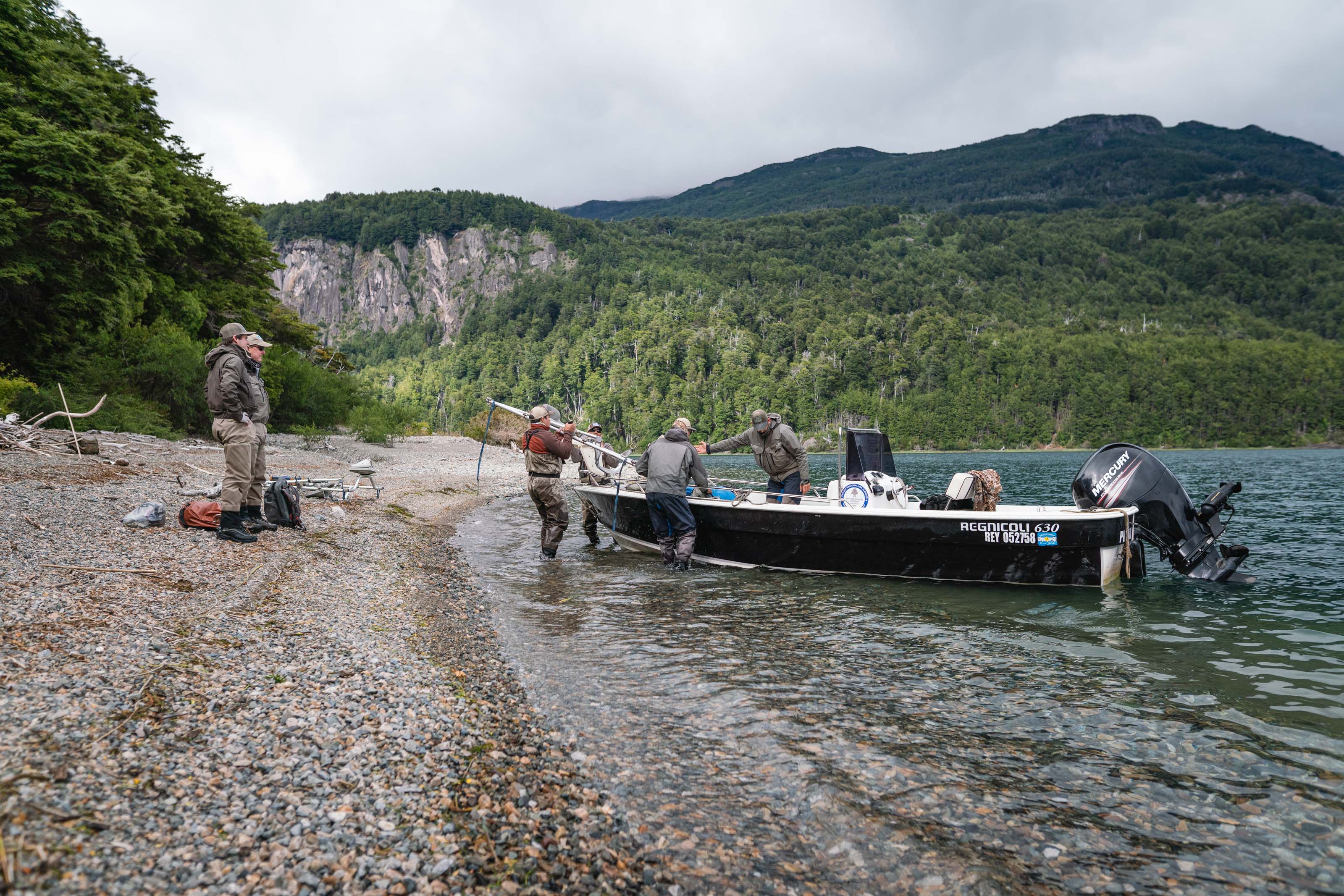 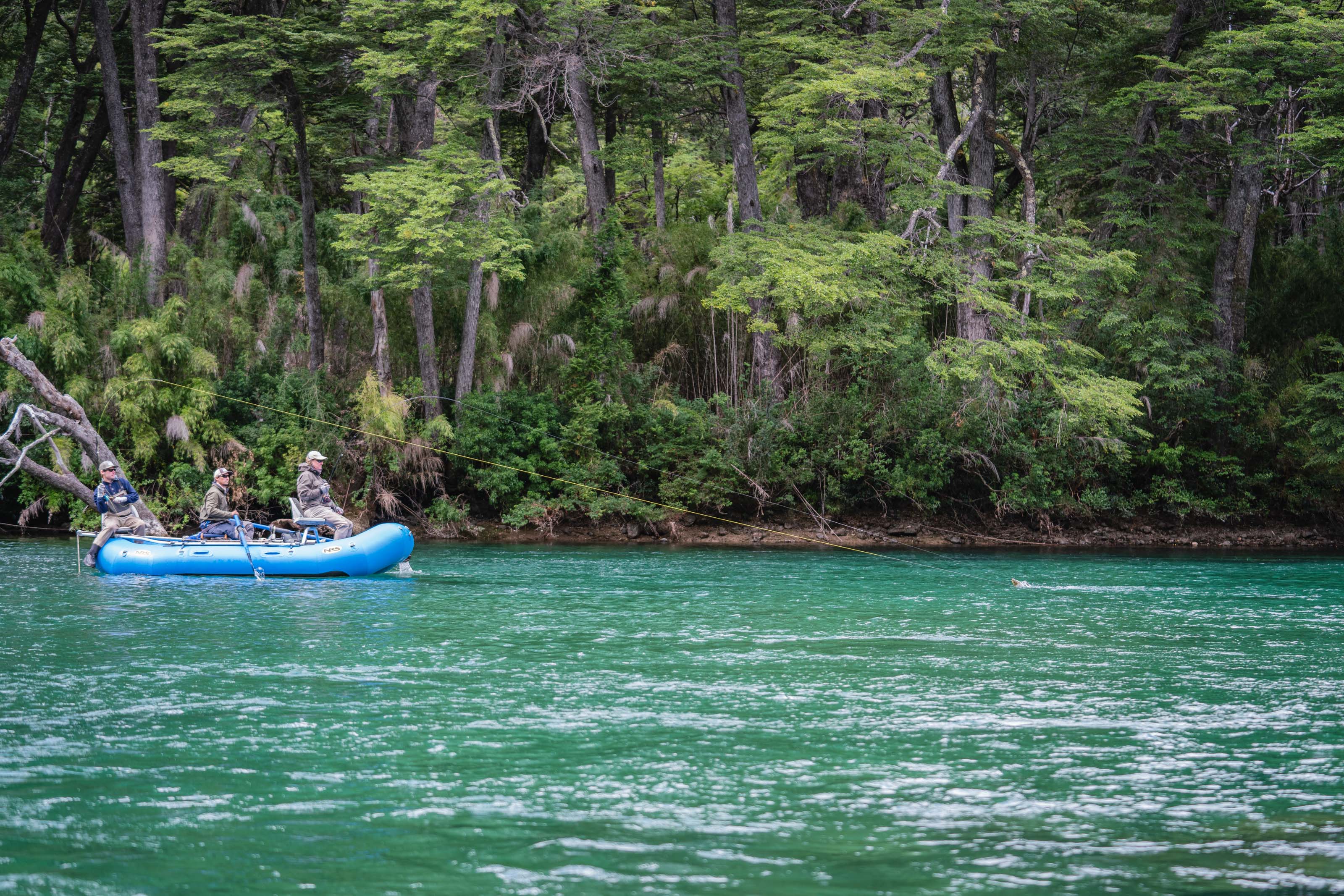 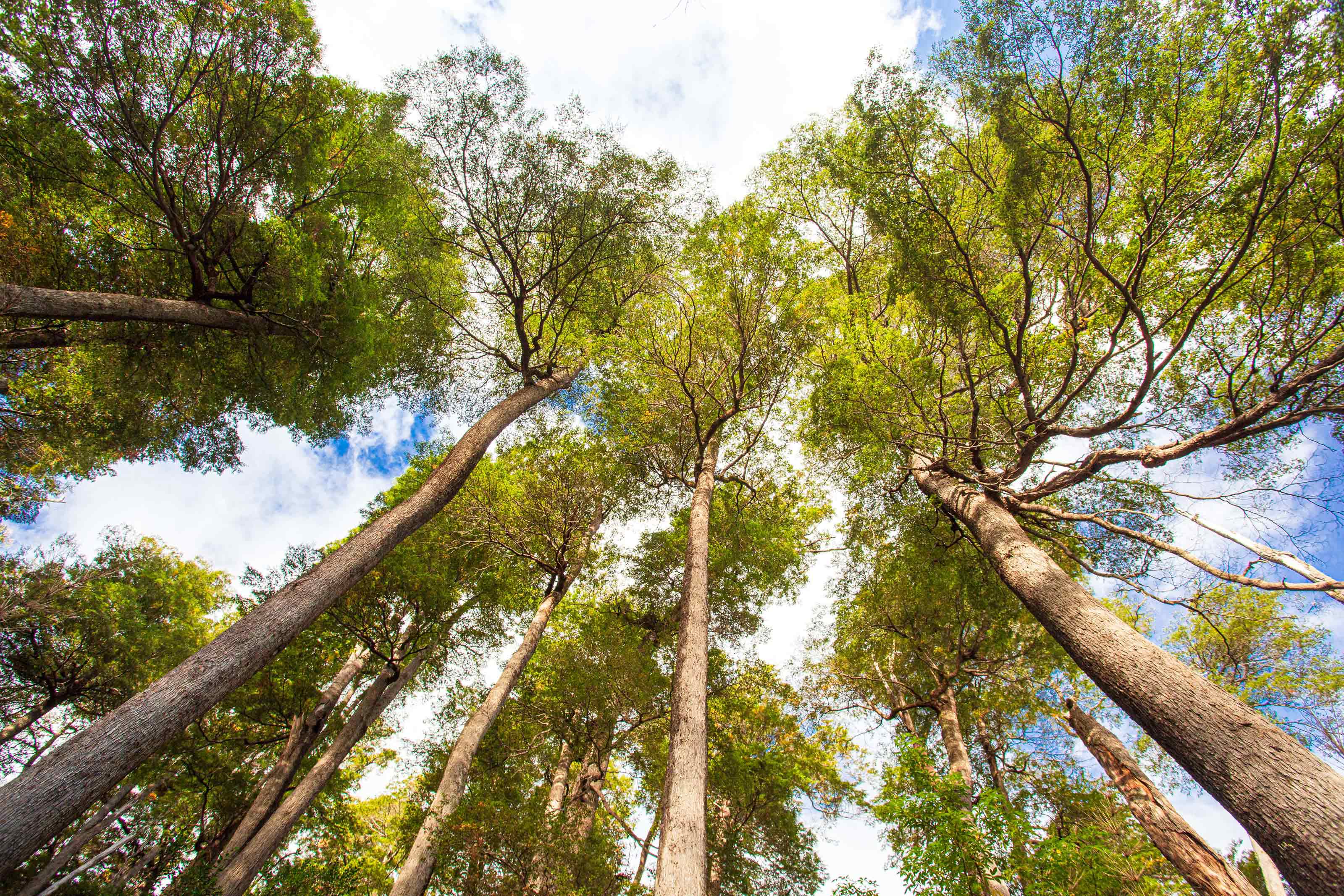 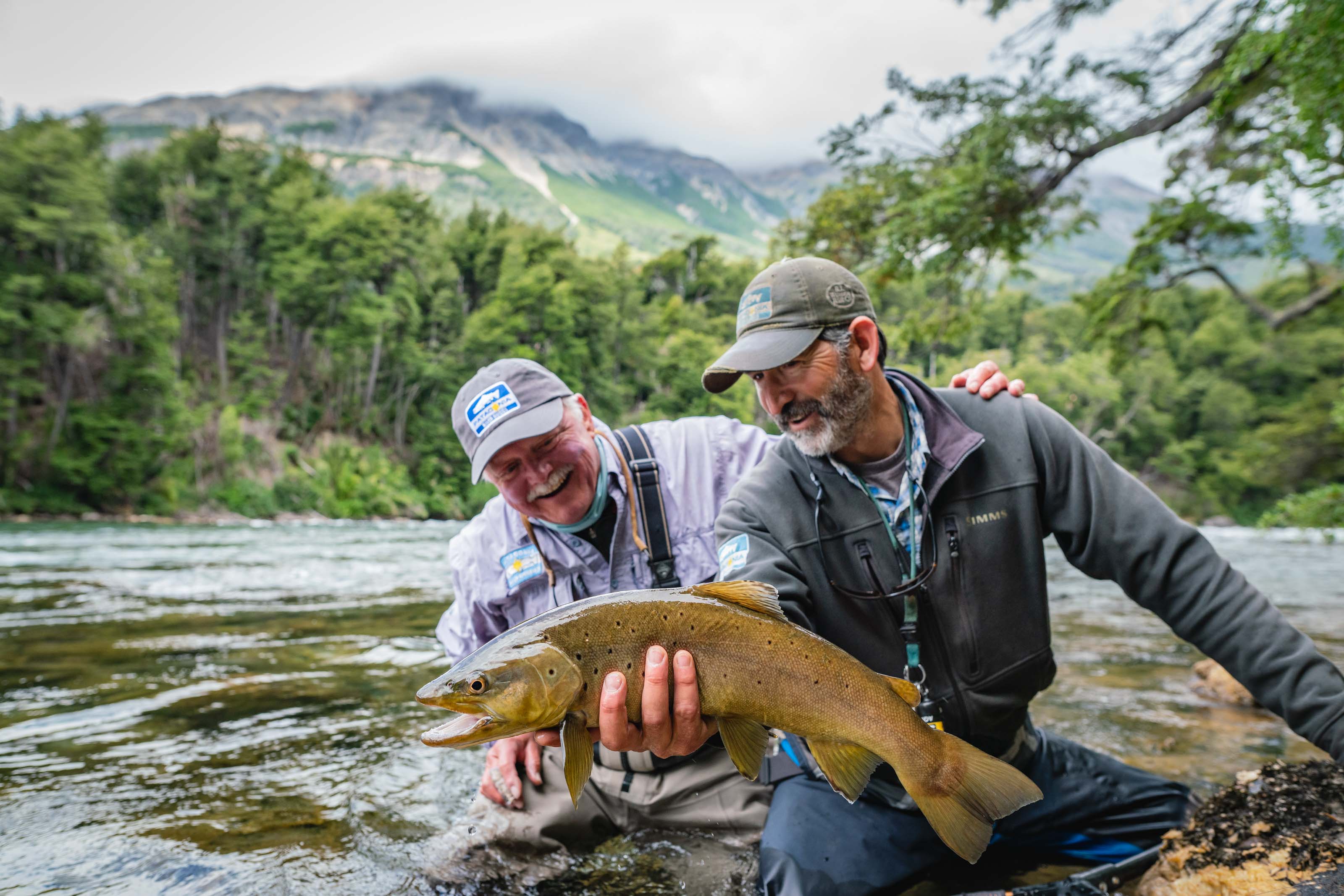 Midday, our convoy made its way to a gravel bar along the Frey’s rainforest-lined banks, to take in a decadent lunch luxuriously presented on tables lined with red-and-white checkered tablecloths—far more than we deserved or expected given our remote locale. As we ate, we peered down river at a stretch of would-be, entertaining whitewater. But it was an adventure we’d never take. Instead, as we washed down our lunches with free-flowing Argentine malbec, the guides pointed us towards a short trail that ran upstream along the river. As we walked, we peered through the ferns and conifers lining the Frey, watching as the guides worked the boats back upstream, rowing when they could, pulling when they couldn’t.

In we went, and down we went, again. Patrolling the opposite bank, exploring new logjams and strainers, slapping our streamers under trees and cutbanks we hadn’t gotten a shot at before — a second chance at the most beautiful brown trout I’d ever seen. To know such stunning browns still thrive in places like the rainforest reaches of the Rio Frey … well, that was enough for me.

But that second float down the Frey? That was for my grandfather.

Want to float the Frey?

There may be no fishing operation in all of South America with a reputation to rival Patagonia River Guides. The result of the hard work of American fishing guides turned Patagonian fishing guides turned Patagonian lodge owners Rance Rathie and Travis Smith, PRG's operation is known for it's diversity, quality, and impeccable attention to detail—both in terms of its fishing program and its lodge in Trevelin. And, regardless of how long anglers choose to stay at PRG's Trevelin lodge, it’s possible to fish a different river every single day.

More fuel for your daydreams